Signed on the front

This artwork is accompanied by a certificate of authenticity

Based on a profound knowledge of modernism, the art of Madi is rooted in the Orient. His compositions are articulated with geometric and dynamic shapes that remind the complexity of Arabic calligraphy. Nevertheless, even when his pieces might be undecipherable and his forms simultaneously evoke human figures and mysterious glyphs, Madi distances himself from abstraction.

Hussein Madi, born in 1938 in Chebaa, is a prominent Lebanese painter, sculptor and printmaker. He is best known for his colorful works inspired by abstract design and Islamic art. He studied painting at the Lebanese Academy of Fine Arts in Beirut before moving to Rome in 1963 to continue his studies at the Accademia di Belle Arti. He then decided to settle in Rome where he lived for twenty-two years, learning various techniques from frescoes and mosaics to bronze sculpture. Madi has had more than sixty solo exhibitions around the world including, Institut du Monde Arabe, Paris; British Museum, London; Ueno Museum, Tokyo; Sharjah Museum, UAE and many more. Madi showcased his work at the Venice Biennale in 2003 and was awarded the Order of the Star by the Italian government during the same year.

Conditions of sales
By registering to bid in the charity auction, you accept that if you will be the highest bidder for a work of art you will transfer the auction proceeds to the bank account of Beirut Art Center. All funds will be used to pursue the activities of Beirut Art Center, a non-profit association, space, and platform dedicated to art research and cultural practices in Beirut, Lebanon. Please note that the Bidder’s and Buyer’s Terms and Conditions and the Seller’s Terms and Conditions applicable in the case of commercial auctions do not apply for charity auctions. If you are the highest bidder, you will be able to have the work of art shipped to you after you send us a proof of payment of the auction proceeds and you will bear any shipping expenses and all duties, taxes, VAT, and/ or custom processing fees in relation to the shipping of the work of art.
Read more 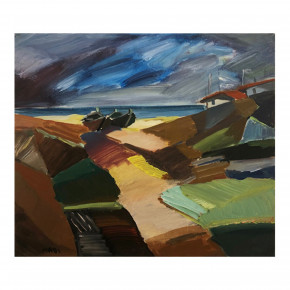