This artwork is accompanied by a certificate of authenticity from Paul Guiragossian Foundation.

In the late 1980s and early 1990s, Paul Guiragossian (1926-1993) was more active than ever. In this period that corresponds with the climax, and then with the interruption of the Lebanese War, he evolved into colourful paintings with figures that were more numerous and dynamic and less monumental.

Entitled Retrouvailles au crépusule (Reunion at Dusk), this piece dates from 1991. During this year, Guiragossian held eight solo exhibitions, including one at the French Cultural Center, on Damascus Road, “which lied, on the once infamous demarcation line that separated East from West Beirut”, remind us Sam Bardaouil and Till Fellrath, and another at the Ministry of Tourism that was named Lebanon the peaceful.

As for the five previous decades, Paul Guiragossian kept exploring the Orient and its relation to modernity and identity. Fawzi Naaman once wrote about him that “The Arab artist needs to extricate and to express his new Arab reality. This does not imply the copying of the past, but the exploration of the future...” 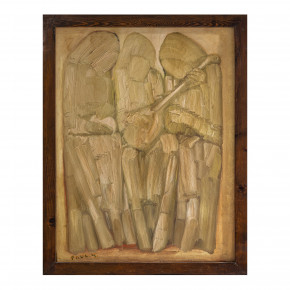