Lot 3, Edward Dwurnik - Why did Sikorski have to die? (Dlaczego zginął Sikorski?)* - Polish Artists in the spotlight ~ Post-war generation in Central and Eastern Europe - Auctions

Why did Sikorski have to die? (Dlaczego zginął Sikorski?)*

Edward Dwurnik, an exceptional painter, has developed his own distinctive language and means of expression over the course of his career. He used this expressive language to depict Polish society, the inhabitants of large cities, members of various social groups, and contemporary political situations. His talent for using caricature, irony, and critical commentary with a large dose of warmth and affection results in an unparalleled style that makes his depictions truly unique. The painting Warum musste Sikorski sterben presents a genre scene involving Tomasz Sikorski, who collaborated with Dwurnik on several occasions. Dwurnik often painted people he knew, a practice that can be understood as his most intimate observation of his surroundings. At the same time, this painting also expresses the artist's respect for the Polish working class and their contribution to society. 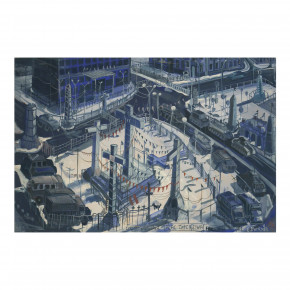