Edward Dwurnik, an exceptional painter, has developed his own distinctive language and means of expression over the course of his career. He used this expressive language to depict Polish society, the inhabitants of large cities, members of various social groups, and contemporary political situations. His talent for using caricature, irony, and critical commentary with a large dose of warmth and affection results in an unparalleled style that makes his depictions truly unique. Dwurnik repeatedly makes reference to the urban fabric, creating his own mythology around the iconic places of Warsaw and other Polish cities. Such is the case in the painting Siegesplatz, which shows Dwurnik to be ever the keen observer of the changes the cities were undergoing. Moreover, he sometimes even anticipated changes in his paintings. At other times, his paintings became palimpsests, revealing successive urban layers, often with a literal reference to the history of the city. 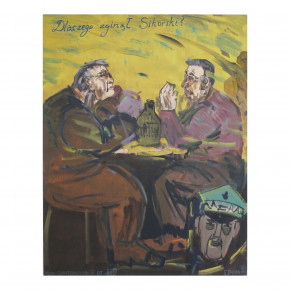 Why did Sikorski have to die? (Dlaczego zginął Sikorski?)*