Portrait with a Veil

Signed on the back

Galerie Janine Rubeiz, Beirut. Acquired from the above by the present owner.

Huguette El-Khoury spent much of her early adulthood taking care of her father as he aged. As the daughter of the first president of the Lebanese Republic, Bechara el-Khoury, she grew up with the pressure of being part of a politically and socially engaged family and found it difficult to finding her own identity.
Only after he died, in 1964, did she start her studies at the American University of Beirut and begin to paint seriously. She majored in fine arts and graduated in 1968. In pre-war Beirut, she moved in cosmopolitan artistic circles and became something of a symbol of female emancipation in the Arab world. But it was during her time in Paris that her sense of liberation began to appear in her work. After her first exhibition in Beirut in 1970, Caland she decided to leave her husband and children and move to Paris. Experiencing a new city freed her from the responsibilities and opinions imposed on her first as a politician’s daughter but also as a wife, and mother. While in in Paris, Caland led a genuinely bohemian life.

Among her creations were elaborately designed high-end caftans. She was wearing one in Paris one day in 1978 when she entered Pierre Cardin’s boutique “I love what you’re wearing,” the celebrated fashion designer told Ms. Caland, her daughter recalled. “Why don’t we do a collection together?” And so, they did. True to form, Ms. Caland designed some with breasts, a belly button and pubic hair on the front and buttocks on the back. In her mid-50s — after the death of her lover, the Romanian sculptor George Apostu, in 1986 in Paris — she moved to Los Angeles to be near her children.

Much like her childhood home, her Los Angeles studio was open to any friends and visitors, and she often hosted prominent American. The artist remained in California until 2013 when she returned to Beirut to say goodbye to her dying husband. Caland’s recent work often makes use of mixed media like in the work The Purple One. Using oils and ink to evoke the craftsmanship and feel of a carpet, or tapestry, using lines that appear like patchwork and stitching. Though they resemble textiles, they are not devoid of human presence and their content bears relation to the artist’s personal life. 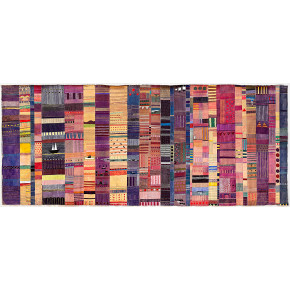