Signed on the reverse, Jan Dobkowski

Jan Dobkowski is a painter, illustrator, author of spatial compositions and one of the founders (together with Jerzy Zieliński) of Neo-Neo-Neo Group. Over more than six decades, Dobokowski has created a remarkably coherent oeuvre, not only in terms of the distinctive artistic expression that is reflected in his drawings, paintings, objects, and actions, but also because his artistic practice offers a highly sensitive view of the world of nature and the environment. His work has been exhibited at the Academy of Fine Arts, Warsaw; Bunkier Sztuki, Kracow; Guggenheim Museum, New York; Art Museum, Łódź; National Museum, Warsaw; National Museum, Wrocław; National Museum, Poznań; Zachęta National Art Gallery, Warsaw; Jackmann Gallery, Melbourne; Love Arts Museum, Miami; Rose Museum of Art, Waltham; Everson Museum of Art, New York; Center of Modern Art, Oklahoma; Polish Museum, Chicago; McGraw-Hill Collection, New York; Municipal Museum Ghent, Belgium; Australian National University, Canberra and many others.

Jan Dobkowski's artistic practice has remained largely unchanged throughout the many phases of his career. His paintings reflect a pantheistic philosophy based on the recognition of constant metamorphosis and interconnection. Initially influenced by Pop Art, Dobkowski began to create compositions using large flat surfaces finished with decorative, New Wave-like lines. The painting Warm Place represents Dobakowksi's most recognizable style of painting, a two-coloured, red-green oeuvre, based on a 'cut-out'-like rendering of figures and shapes from the background, as seen in his famous spatial compositions. The shapes in Dobkowski's paintings are constantly changing, resulting in new visual structures. Green represents nature and red represents the energy of life, a symbolism that became the conceptual ground for many of his later spatial compositions.

Publication on the occasion of the exhibition "Jan Dobkowski 70", 2012

Publication on the occasion of the exhibition "Concrete Art. Collection of Heinz and Anetta Teufl from the Art Museum in Stuttgart ", 2011, color reproduction, page 14. 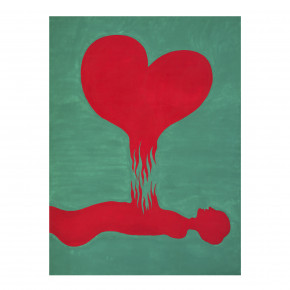