Signed and dated on the reverse, Jerzy Nowosielski, 1958

Nowosielski’s most well-known works combine the tradition of Orthodox icon painting and the tendencies of the Western historical avantgarde. In the 1950s, Nowosielski dedicated his artistic practice to research and experiments, from figuration to geometric abstraction, like other representatives of the post-war Krakow avant-garde. Although the artist's style changed over time, it is usually easy to identify his works. The most characteristic elements of Nowosielski's work were elongated figures, mainly feminine, clear contours, clear colours, and flatness, reminiscent of early 20th century avant-garde paintings. The work Abstract is part of the series of paintings in which he skillfully combined a thin black line outlining of squares, triangles, or, less often, circles, with pure, luminous colour, whose intensity often produces the effect of glowing forms.

The painting is catalogued in the archives of the Nowosielski Foundation 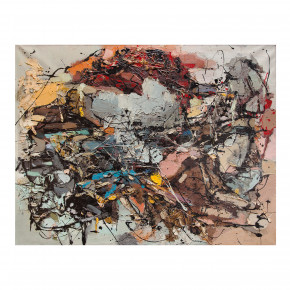