The work is accompanied by a certificate of authenticity

The Łódź Kaliska group was established in 1979 during the plein-air in Darłowo as a neo-avant-garde formation. From the beginning it was composed of artists Marek Janiak, Andrzej Kwietniewski, Adam Rzepecki, Andrzej Świetlik, and Makary (Andrzej Wielogórski). Since the group’s formation, the artistic program used Dadaist strategies in happenings and performed anarchist actions. They also ridiculed the Polish neo-avant-garde and highlighted the absurdity of life in Polish society. In 1989, the group changed its name to Łódź Kaliska, mixing their Dadaist attitude with an interest in postmodernism. This could be seen in group’s "staged photography" and films, which they created by making pastiches of famous paintings and films. The work Wachlarz is part of the New Pop series, which started in 2000, and represents the group's strategy of annexing the gains of art relative to mass culture. New Pop is a series of manifestos and artistic actions. 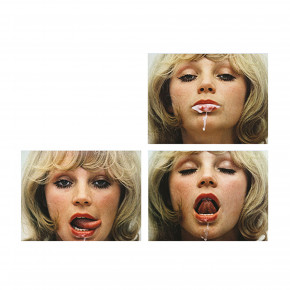