Medium: Mixed media on a map of Murcia Spain

Gift from the artist. Private collection, Lebanon. Acquired from the above by the present owner.

Etel Adnan is widely recognized as one of the foremost authors, poets and playwrights of her generation. Widely known for her literary work, she fluidly moves between the disciplines of writing and art.

Etel Adnan’s style has not changed drastically since the 1960s, when she first started painting at the age of thirty. She has always been painting almost the same subject - nature - with the same formats - small canvases - and the same tools - palette knife on paint. Back then, her method of painting was pulling down her strokes with the palette knife from the top of her canvas. She developed the palette knife method when she met artist Ann O’Hanlon (wife of Richard O’Hanlon, an artist who had apprenticed with Diego Riviera). After being questioned by O’Hanlon as to why she did not paint, Adnan picked up a palette knife that was lying around by chance, placed the canvas on the table and worked on them as if she were writing. Simone Fattal later wrote that O’Hanlon was so shocked by the “spontaneous perfection” of Adnan that she quit her job at the Dominican College and devoted herself to Buddhism.

As an abstract painter, Adnan focuses on strong lines and squares, her recurrent point of reference in her earlier paintings, which are almost always small in size. Her direct, straight-forward paint strokes and lucid swaths of color make her devoted investigation of painting truly fresh, poetic and unpretentious. Her paintings have reoccurring themes from nature, showing that there is a plethora of ways to express the beauty of the sea, mountain ranges, and fields. Adnan depicts almost the same image in all her paintings, with a marriage of different colors that pull you in. Absolute browns balanced with bright yellows, holding a heavy erotic tension. Her paintings are also, although little and seemingly decorative, talismans of energy, in a sense playing the role that icons used to play for people who believed. Exemplifying how Great Art and simple perfection can generate feelings and emotions. 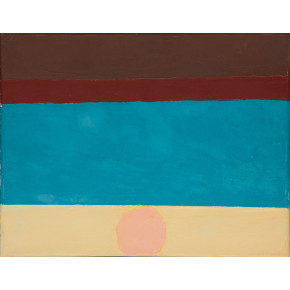